I’ve got something special for you today! A special edition of Friday Fashion!!! Why is it special? Because it’s for the blog tour for The Way Back to You by Michelle Andreani and Mindi Scott! AND THERE’S A GIVEAWAY TOO!!!! OMG, so exciting, right?!! First, here’s a bit more on the book and the authors! 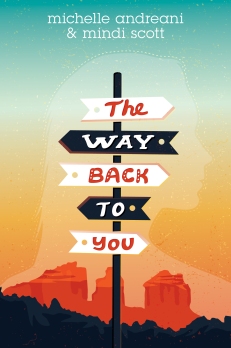 Six months ago, Ashlyn Montiel died in a bike accident.

Her best friend Cloudy is keeping it together, at least on the outside. Cloudy’s insides are a different story: tangled, confused, heartbroken.

Kyle is falling apart, and everyone can tell. Ashlyn was his girlfriend, and when she died, a part of him went with her. Maybe the only part he cares about anymore.

As the two people who loved Ashlyn best, Cloudy and Kyle should be able to lean on each other. But after a terrible mistake last year, they’re barely speaking. So when Cloudy discovers that Ashlyn’s organs were donated after her death and the Montiel family has been in touch with three of the recipients, she does something a little bit crazy and a lot of out character: she steals the letters and convinces Kyle to go on a winter break road trip with her, from Oregon to California to Arizona to Nevada. Maybe if they see the recipients—the people whose lives were saved by Ashlyn’s death—the world will open up again. Or maybe it will be a huge mistake.

With hundreds of miles in front of them, a stowaway kitten, and a list of people who are alive because of Ashlyn, Cloudy and Kyle just may find their way to back to her…and to each other.

Michelle Andreani is the co-author of THE WAY BACK TO YOU (my debut novel!) with Mindi Scott, forthcoming from Katherine Tegen Books/HarperCollins. Also an occasional scatterbrain, milkshake devotee, and liker of love stories.

Mindi Scott lives near Seattle, Washington, USA with her drummer husband in a house with a non-sound-proof basement. Freefall, her first novel, was published by Simon Pulse in 2010. Her second novel, Live Through This, was published (also by Simon Pulse) in 2012. She contributed a chapter to Violent Ends, a collaborative novel written by 17 young adult authors (out in 2015), and co-wrote, along with Michelle Andreani, the 2016 novel The Way Back to You. She is represented by Jim McCarthy of Dystel & Goderich.

And now for the fashion! Drumroll please!

And Now For The GIVEAWAY!!!

There are THREE copies of The Way Back to You up for grabs! Unfortunately it’s US ONLY!

Finally, if you enjoyed this post and are looking for more bookish fun and are interested in The Way Back to You, be sure to check out the other tour stops!

8 thoughts on “The Way Back to You Blog Tour | Friday Fashion: Special Edition Plus GIVEWAY!”