This is my first time doing ABEA and ohmygosh I’m so excited! First off, let’s get the introduction over with!

1. What is the name you prefer to use?

Hello peeps! My name is Lila!

3. Have you participated in ABEA before?

1. If you could recommend one book blogger, who would it be and why?

I would definitely recommend checking out Cait at Paper Fury! She’s so unique and bubbly and enthusiastic. You can really tell how much she loves books and blogging and her passion just totally draws you in! I look up to her so much!

2. If you could create a playlist that reflects your bookshelf, what would be the first song you choose? (You can include more than one if you want)

Oh! I’d probably choose “Castle” by Halsey, because it reflects how many awesome fantasies with strong, kickass heroines I own!

3. How do you arrange your bookshelves? Is there a rhyme or reason? Or not at all? (#ABEAShelfie)

At the moment, my bookshelves actually aren’t organized. I mean, I try to keep series and books by the same author together, but other than that my bookshelves are overflowing to the point that I just put books where they fit. Here’s a shelfie to give you an idea: 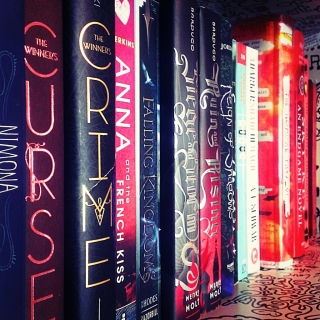 I’m so excited to get to The Star-Touched Queen by Roshani Chokshi! I’ve heard such AH-mazing things about it and it seems so mysterious and intriguing!

The book on my TBR that I’m most intimidated by is Outlander by Diana Gabaldon. First of all, it’s huge. Second of all, it has medium-ish size font. Third of all, and finally, it’s an adult book and those just intimidate me because they tend to move a lot slower and I (having ADHD/ADD) am afraid I’ll lose interest.

5. If you could choose three characters to have lunch with, who would they be and why?

Hmmm…Let’s see…I’d choose Zuzanna from Laini Taylor’s Daughter of Smoke and Bone trilogy, because she’s an incredible friend and is hilarious, I’d choose Aza Ray from Magonia by Maria Dahvana Headley, because I love her sarcarm and her outlook on life and death, and I’d choose Manon Blackbeak from Sarah J. Maas’s Throne of Glass series, because I think she’s just interesting and would actually be really awkward and funny if forced to dine with Zuzanna and Aza Ray (and me)!

Diversity is very important for many groups but today I want to discuss what I feel like is the “forgotten group” of the diversity conversation. We have plenty of calls for representation of LGBT+ folks and POC and the disabled and sufferers of mental illness. But there is one group we consistently forget to discuss and that is the poor and socioeconomically disadvantaged.
This is such a passion for me because I grew up poor and was even homeless twice, and I knew and know plenty of poor kids like me, yet I never really see us represented in literature, at least popular literature.
Why is representation of the poor so important? Because there are so many miconceptions about us. That we are all drug addicts and drug dealers. That we sit on our *sses doing nothing all day (newsflash: poor people often have multiple jobs or are even in school to get a degree). That we’re all frauds who just want to get paid by the government. These are all things that I, personally, or my mother has been told, despite the fact that we’re both in school, her to get her doctorate, and I at one of the best universities in the world. It makes me so mad how many deeply ingrained misconceptions people have about the poor and it’s time to change that.
Another reason representation of the poor is important is because it important for people to know that they’re not alone. My home country, the United States, has a massive poor population. Yet we never see ourselves represented in media, aside from as druggies and gangsters. That makes it feel awfully lonely to be poor. From the way we are represented in the media, I would think that I’m the only one. But I’m not. That needs to be shown.
What can we do to “fix” this? First, we can recognize the poor as an underrepresented group. Then we, as a community, must call for more accurate representation of the poor. And finally, we have to be the ones to take steps to write stories about the poor. It’s really that simple.
So that’s it for my schpiel today. I hope you found it interesting and helpful! I’ll see ya on the flip side!